Palmistry: Personality in the Palm of Your Hand

We have all seen the Fortune-Tellers in our local carnivals. If they are not working the Tarot Cards, they are Reading Palms. Palmistry isn’t just a vehicle for seeing into that person’s future, did you know? It can also be used as a way to see their personality! In fact, it is probably more reliable as a personality-figuring tool than as a fortune-telling tool, simply because they are always telling you that you “still have free will.” So any future-telling is meant as a guideline which you can change by making decisions that will lead you in a totally different direction. That will be $25, please. 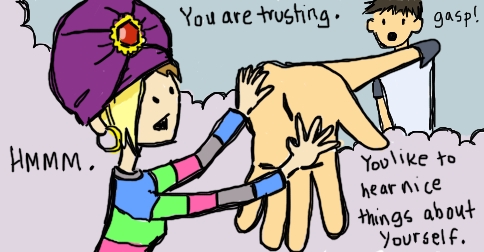 Reading a palm is supposed to be able to tell you about the person’s character, too. An experienced palm technician can examine (which includes a fair amount of touching) the hand and know about this person’s traits and inclinations. Forget about the future! Let’s learn about now! On the INSIDE!

Palmistry on the whole is a little bit tricky. There are a lot of lines on your hands which could mean ninety thousand different things based on whether or not your Mount of Jupiter is firm to the touch or if your Mount of Venus is practically nonexistent. Some lines might not even appear at all on a person’s hand, and some lines may be easily mistaken for other lines which may or may not appear. And then the curvature of lines somehow combine with the depth and general appearance of them which causes them to mean many wildly different things. Do they cross other lines? Swoop upwards or over to the left there? Are they cross hatched with tinier lines, and if so do any of those lines make triangular shapes or maybe squares? They do? Where are they and on what line? If it’s over there it may mean that while you are creative, you aren’t a very good artist. Oh, but if it’s under that finger, it means quite the opposite.

Deducing a personality with palmistry is actually a lot like reading a road map. That is, if you don’t think of road maps as ways of getting here to there, although, I guess that’s what you do when you are trying to tell the future… But instead if you look at the road map as evidence of what the area looks like, too. If the map has little altitude lines and geographic markings you can go, “this region is pretty sparsely populated and is characterized by craggy cliffs and what appears to be a shoreline. The names of the towns sound like they might be sea towns. I bet some people make their living here by fishing.”

THAT is what personality-palmistry is like. Only the road map of palm reading is hundreds of times more complicated. It would be a map where if Rural Route 9 set off at a curve that went over Santiago Hill at an acute angle, it would indicate that the people who live on Santiago Hill would mostly likely be Amish Farmers who secretly long for a life of fighting crime. It makes no sense to me, but by golly there sure are a lot of people out there who say they understand it all completely!

In Summary: Palmistry is a complicated discipline which incorporates a lot of guesswork, and things are “apt to change due in part by free will.” Yeah.

Pros: Hands are kind of interesting, and it seems like it COULD be valid on some level that your subconscious thoughts show themselves through the lines of your hands. Although actually saying that makes it sounds remarkably insane. Failing all else, if you become good enough at it, or at least at faking it, then you could make a few bucks at a carnival or festival!

Cons: I didn’t learn anything about myself. I was just too confused. And more importantly: there is a lot to figure out and memorize that goes into reading a palm. So much effort. Yech. 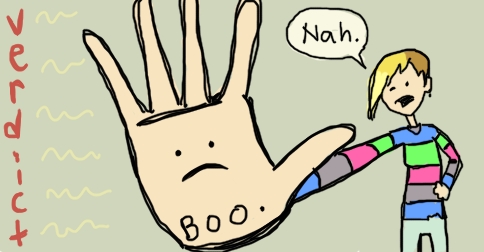