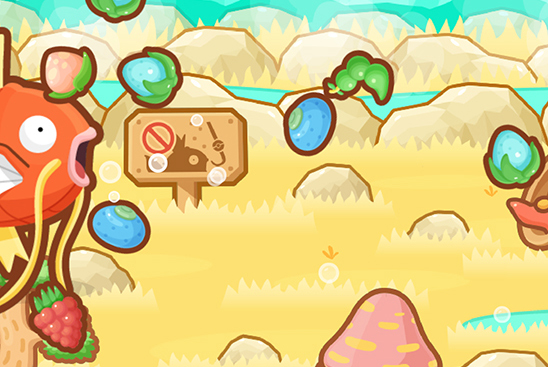 But not Pokémon Magikarp Jump! This one is barebones, totally obvious that it’s just a thing to pass the time. And it’s great. It’s finally Pokemon’s version of a clicking/tapping game and the mechanics are superbly mundane.

First, you fish for a Magikarp. You hang out with the Magikarp outside of water and force it to flop helplessly higher than the opponent Magikarp. When it’s not flop-racing, it hangs out in a pond where berries appear periodically. The Magikarp seems to suffer often, being dragged in and out of the water.

Then, there are the Random Encounters. Sometimes, some pals ambush you with an extra assortment of berries. Often, a lone Feebas stops by and powers you up with a lot of Jump Points. Random Encounters can occur while at your pond, after Training, after League Battles, and more. Outcomes range from earning training points or jump points, to nothing happening, to you losing your Magikarp entirely. You lose them often; they are expendable.

You’ll keep going for the Achievements and the points, like most games. As you level up your food and trainings, you get more Jump Points each time. As you retire each Magikarp, you can usually go up a new level the next time. You unlock new foods and training as often for at least while. Then it gets harder, so you have to retire a few before you unlock anything new. But you finally do. Then it’s more of the same.

Each new iteration, or Generation, of Magikarp appears to not know what it is in store for. It goes for your old rod just the same, every time. Take pity on the Magikarp and feed it forever. Tell it that everything will be okay.

If you finally feel a hint of boredom or melancholy, just click on the TV on the shore of your pond, for the greatest song Pokémon has to offer.

Anyway, I gotta go catch a new little floppy dude to force into competition and name it after one of my frenemies. That’s right little cchrisikarp, jump. Jump!