The International Co-operative Corporation for Corporate Cash Enbiggenment (ICCCCE) today announced a new initiative described as a “beautification and cultural enhancement project, which would have poor people phased out of existence by 2025.

In a press conference earlier today, ICCCCE Chairman Rich Dubloon said that he’d first noticed the issue when dropping his children off to play with some economically disadvantaged friends they had met during a cultural exchange at their prestigious private school.

“I bought the school immediately, don’t you know. Put a stop to that rot!” said Dubloon. “Now you might call me a right old fashioned sort but I didn’t realise these sorts of scallywags exist, you see! I’d seen them in pictures and at the talkies but damned if I didn’t think they weren’t make-pretend! A contrivance, you see!” 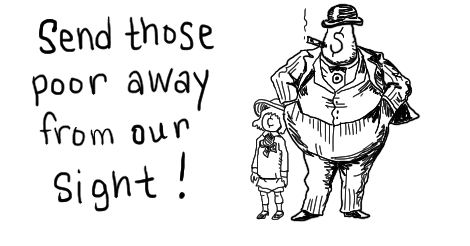 Since its foundation in 1987, ICCCCE has been at the forefront of social policy and issues of law, successfully recommending and implementing many bleeding-edge ideas — from the campaign to ban any sport than isn’t horse-based to their successful genocide campaign against anyone whose skin matches the colour swatch for Moroccan Sunset — to the line of weapons they made from those people’s eviscerated limbs, a wildly popular line known as “Bleeding-Edge Weapons” and this year’s Forbes “#1 Toy That Billionaires Like.”

Dubloon stated that he had begun discussions with governments internationally and that most countries could expect to see the plan in place by 2020, with an end target of 2025. Asked about the process that would be undertaken to achieve their ends, Dubloon answered so excitedly that his monocle popped out.

“Now there was all sorts of talk about phasing poor people out by lifting people out of poverty so that, you know, everyone would be able to live a good life and while I understand you know, that these scoundrels will tell you all sorts of rot about rights, I’ve got a jolly good friend who has an army of robot-dog mounted laser beams and those things will phase things right out of existence if you give them enough robo-kibble”

The robot dog apocalypse is already scheduled for March 2020 in the U.S, New Zealand, and Australia.