It’s finally time to embark on a journey to the land of Sneer! Unlike most conventions that are typically set in one city per year, or even the same city, the SneerCon will be traveling the world with all the best that Sneer Campaign has to offer. Hey, we want to travel! Admission is free with only your eternal devotion. 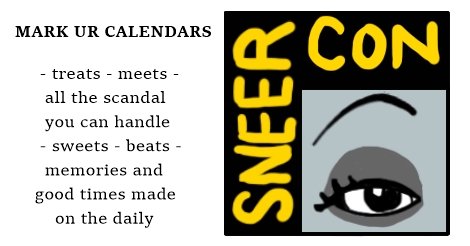 Fill up on Sneer gear. The official Sneer1Imports store will represent us, however, many third-party vendors will be pleading with you to buy their off-brand gear. Get it. Get it all! Dress head to toe in Haughty Couture like you’ve always wanted to. But if it has a famous person from the past on it, better snap it up quick before their estate puts a stop to it. It’s all to be considered limited edition!

The Official Sneer Society will be there to represent your best interests as fans! They will hook you up with assorted free goodies such as stickers and second-hand buttons. They will have a brochure or two, as well. They might even make polite demands of us. Join the fan club right at the convention if you haven’t already, but also shame on you.

Okay so this is just a live show. JUST? No, it’s an amazing sneerxperience! Come watch performances, speeches, and more at the main stage during the entirety of the event. Live music featuring  — well we haven’t asked them yet, but how could they say no? We assume that the following artists will show up as requested with no pay:

& more obviously because who wouldnt show up for this

Used books, cat-petting stations, coffee in one hundred ways, isolation tanks, tarot reading by Tonyana, information, TV marathon tents, puppet-making seminars, voodoo lessons, vision boarding, insult clowns, smooching booths, pony rides, a small satanic temple or two; the SneerCon will be a haven for places to chill where you won’t necessarily have to spend all of your dollars. Just hang out and be seen.

Coming soon to a city near you!