In all seriousness, you can only carry about three sheep at a time without looking like a fool. Even human beings who are pretty strong and have long limbs can only really carry three. They will always try five, but three is more sensible. One under each arm and one behind your neck.

We used the barter system because it made sense and is a logical way to do business. But trading sheep for cartons of ice cream so you can give your only son that didn’t die in childbirth a birthday party gets old pretty quick. No one wants to make a bunch of trips carrying sheep around. 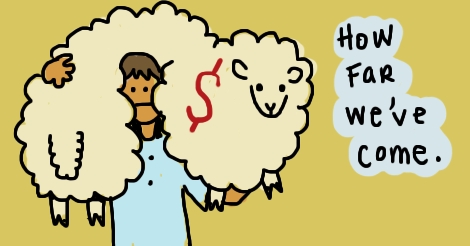 So someone, a smart someone, invented a system where a little coin was representative of a sum. Maybe it was like, “Two sheep equals one big coin.” And people loved that, because now you just carry around the coin and no more heavy lifting to trade goods down by the river.

Sometimes I lay in bed and try to imagine aliens shaking their little green heads at how we do some things in our civilization. Coins? This is surely one of them.

Here’s the problem: It is 2018 and a lot of people still use the coin system. A system that is horribly outdated, cumbersome in your purse or pocket, filthy, and let’s be honest here, it is illogical for the present era. We have the technology and the smarts to stop using coins. But we haven’t. Why? I don’t know.

You want to make America great? Kill all the pennies. 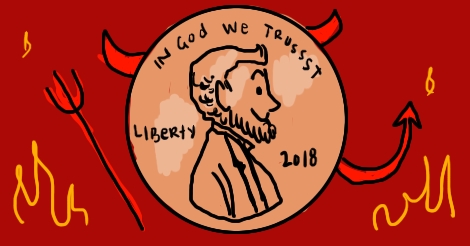 At 2 PM today, a weekday, a day where the temperature outside is close to 750 degrees, I stumbled into a bank branch to close an account. Let me stop you right there, I know what you are thinking: This dude is going to be in that bank for about two hours while they shuffle him back and forth. Not so, surprisingly. See? We have made some advancements over the eons.

But as I already told you, I stumbled into a bank branch at 2 PM on a weekday. I expected what I saw: A long line of people of all shapes and sizes, because it’s Los Angeles. No one works, yet somehow they all live. So the line is ten deep. I’m in no hurry. I’ve accepted that I should not be in any hurry whenever I leave my damn house.

About 15 minutes later, I am second in line. A woman, about 48-ish I reckon, is standing in front of me with a big bag clutched to her chest that looks like it has a watermelon inside it. I actually thought she was literally holding a watermelon. Spoiler alert: It was big bag of pennies. 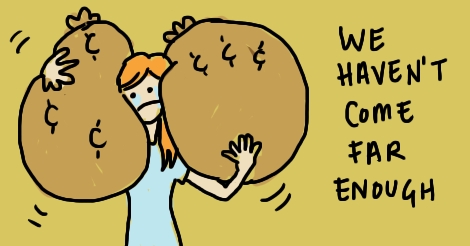 2018 is the current year. I don’t feel like it is a stretch for me to be standing there somewhat dumbfounded as to how it is indeed 2018 and this woman not only collected-up all those pennies, she didn’t just take them to a coin sorter, she didn’t just ignore them, and she didn’t just roll her own change so she could simply drop it off. In my increasing years, I have come to accept the fact that people do dumb shit all day long. So I give myself some anger-leverage, because I have also come to accept that Stupid is Forever.

Here is the conversation that absolutely should have taken place:

Teller: “Hello, ma’am, how can I help you?”
Woman: “I have a big bag of pennies, as big as a watermelon.”
Teller: “Great, please place them right over there in that bin labeled Trash, and I’ll just give you four dollars and take your word for it, dumbass.”

You have a better chance of those pennies mattering if you would just take them down to a fountain and make 10,000 wishes instead of carrying them, or even rolling them beforehand, into a bank branch. Play the percentages. Choose the wishes.

“Sir, what are you doing?”
“Who, me? I am dumping this burlap bag of pennies into this fountain.”
“Uh, why?”
“Because I don’t want four dollars, dude.”

Go, right now, and count out 400-500 pennies. Carry that little bag around for ten full minutes. Go ahead, I’ll wait.

Are you back? Great. Now, was it worth four dollars for you to lug that bullshit around your house like a moron? Throw them in the garbage.

I have been personally mistreating those copper critters for almost four decades and I bet you I cost myself about seven dollars. 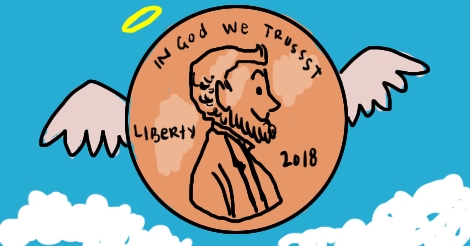 “Pennies from Heaven!” That’s what the old timers say. Makes you think, doesn’t it? If God created Man in his own image, and we have a saying about pennies from Heaven, that means that God is like us and has pennies laying all over the place. Is that where you want to spend eternity, friends?

If I was homeless or a waitress and someone gave me pennies, I would kick their ass all over the place.

Society, listen. Just stop. Stop using coins. Either roll them yourselves and drop them off at the bank, or use a coin service at your grocery store for a small fee. Let’s evolve, as adults, and stop pretending it is 200 BC. Use your freakin’ debit card, bud.