While I am here in Las Vegas, I can’t help but have that ol’ Frank Sinatra on my mind. This was the known stomping ground of the legendary Rat Pack, and like them or love them or hate them or maybe don’t even know anything about them, they did exist. 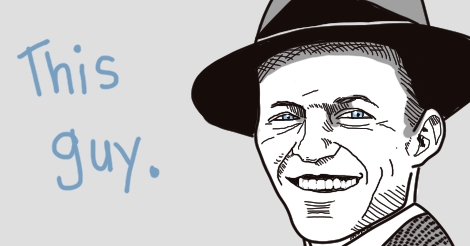 Whippersnappers, you have probably heard Frank Sinatra without even knowing it. Have you ever seen a little show called Married… with Children?? (probably not, if you already don’t know who Sinatra is). Well that’s his song as the theme song. Or that New York song about spreading the news. How about that one?

Frank Sinatra in his younger days was what your grand parents and great grandparents knew of as a “crooner.” Crooners had a “personal” style of singing that was somewhat quiet because they finally had microphones with which to record hits. This meant that their mouths were very close and our grannies’ pannies apparently blasted into the stratosphere because of this. They imagined these mouths as singing sentimental romance words directly into their ears or open mouths or WHEREVER ladies want that sort of thing to happen. What I am saying is that even though my family always called him “Frankie Not-so-hotra,” the women of the past disagree.

Over the years, he started to sing in a style that is almost like arrogantly talking, but then occasionally would belt out some great notes, to remind you that he could sing, if he wanted to. But he just didn’t feel like it. To some people, this suggests that he had an enormous ego, and an ugly personality, and do not like him as a result. I, on the other hand, admire this attitude of his and find it to be entertaining. This is very possibly because he is long dead and there is no chance that I will ever have to meet him, unless I run into his impossibly self-confident ghost while wandering the streets of this bright city in the spectral hours (between midnight and six in the morning). Here is a drawing of Ghost Sinatra. Please note how big his head is. 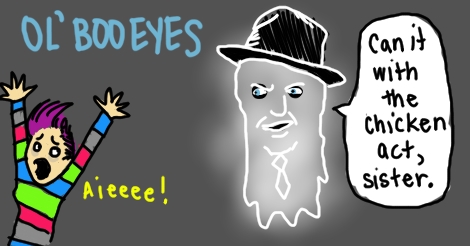 I’ve said before that I have a karaoke plan for certain scenarios. One is if I am slamjammered in Texas, where I will sing the Ballad of the Alamo. The only other possible song I might sing, if thoroughly blitzed on the sauce, is “That’s Life.” And only in the style of Frank Sinatra, in one specific recording, my favorite. In quiet times, I practice my showmanship and stage presence to this song, just in case this horrible/wonderful moment ever has to happen. Bee prepared.