The Inevitable Talk about Ayn Rand

If you are following the life paths of my friends, you may remember that Kieron is one of those college graduates. And as is usually the case with most of them, they become introduced to the mind of Ayn Rand, for better or worse. Of course, it became a conversation that I needed to draw out because it was just so compelling. And by that I mean, “because he started shouting at me and that’s apparently what I think is comedy.” 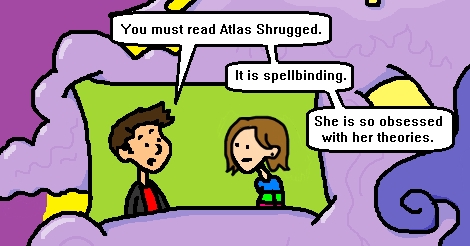 Another detail about Kieron is that he lives in Nottingham, and I need one of those Robin Hood hats and because of a series of increasingly unbelievable mishaps, I still don’t have one! Sometimes he covers up his guilt by trying to distract me, and I think that’s why he started talking about Ayn Rand. He wasn’t just bringing her up because he couldn’t wait to share her brilliance.

Click upon this comic, as usual, if that’s the kind of life you’re living. If you want to see the angry pixels around our eye dots, that’s the way to do it.