The Most Happenin’ Dumpster

Entertainment comes in many forms. Our favorite form generally involves turning off the brain while staring at a computer screen. However, we don’t always require that what we are watching has been filmed and edited. We enjoy some live (non-improv) street performance, and people watching, as well as being shut-ins who will peer through curtains or sit on a porch just to observe with unblinking, hypnotized eyes. 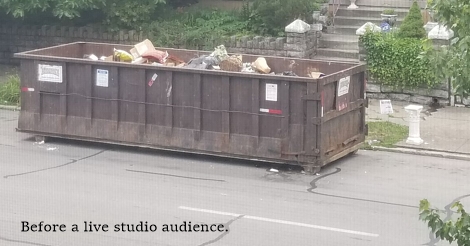 Sometime last week, a neighboring house across the street apparently decided to do a lot of heavy duty renovating. We aren’t nosy enough that we have gone over to ask specifics, but we ARE nosy enough that we noticed and then have watched the most unusual thing unfold.

It appears that the appearance of a dumpster is Big News because it seems that people from blocks around are flocking to it. From our front porch and upper story windows, we watch as they are rummaging, garbage-picking. They aren’t counterculture college students, either. These people range from small child to elderly, all genders, all races, and all apparent levels of cleanliness and sanity. 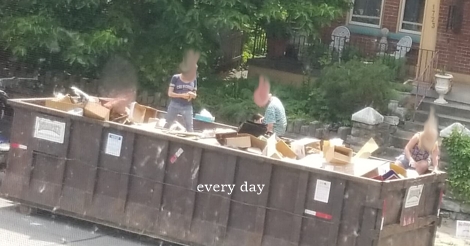 But why are people descending upon this dumpster? Are these eco-warriors intent on upcycling and reducing waste? Could the reason be as simple as “the economy” ? Is this poverty that may or may not be intrinsically linked to the dire pandemic of drug addiction that has crippled the entire tri-state area? Are we living in [some impoverished city well-known for poverty]? WE DOUBT IT. So clearly the alternative is that this dumpster is something MORE.

This giant trash receptacle must be a fantastic club, judging by the lines of people waiting to get in. Also, there is usually someone standing at the entrance, either a lookout or a bouncer, we don’t know yet. We haven’t checked because we don’t want the shame of being turned away. Sometimes the lookout gets inside too, so clearly the party is too fun to ignore. 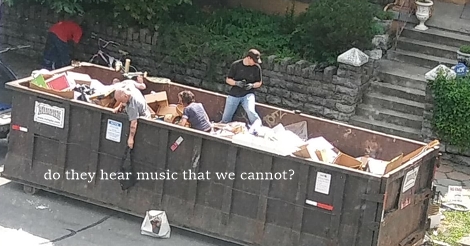 You know how stores try to do new things all the time. You’ve heard of pop-ups. Maybe this is just a bold new attempt to move product − and boy are they ever! We heard a girl calling out to her friends about finding some jewelry and other items. We have seen people coming away with furniture, plant stands, columns, even pillows. I’m keeping an eye out for the good stuff from my window but we already have a houseful of furniture and pillows.

Could it be that maybe a family has moved in? I have seen bubbly internet articles about millennials making non-houses into homes, because it’s quirky and cute and NOT because it is the 2018 equivalent of Hoovervilles − is this one of them? The other day, Amandoll saw some people mosey up with a baby in a stroller and start talking to the dumpster people like they were dropping by in a neighborly manner. I have personally seen an empty baby stroller loitering outside of the dumpster, not very near to any adult people. Was the baby inside? Is this a family residence? 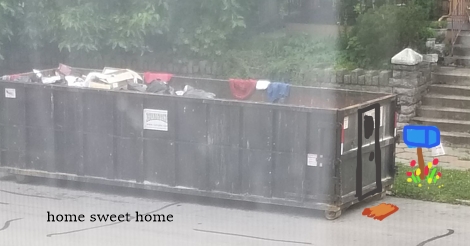 The only other thing we can think of while we are making up short plot lines and dramas for the series before our eyes is that there are a lot of hidden cameras and microphones recording it all in order to be televised later. We will absolutely be watching it then, too, even though we have seen the gritty truth in person, at a distance (and also from our own recording devices because I can’t see very far). Don’t you lie to us. You want to watch it, too.