Why Feminism Must Be Intersectional and They Should Reintroduce 3D Doritos

In today’s vernacular, sometimes Feminism can be a dirty word. To others, it’s a thing of hope — the ideology and expectations of a future generation on its shoulders. But even amongst those followers there are divisions — schisms in a movement so massive it can’t help but crack under the heavy weight of its inertia. But for the survival of this phenomenon to be ensured,  one thing must stay true: Feminism must be intersectional. Also, I’d really like it if they brought back those 3D Doritos. 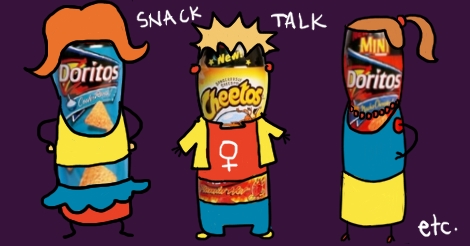 It seems like there’s so many types of feminism and sometimes it’s hard to really understand how it comes together as a core ideology — from the often disparagingly used “white feminism,” to radical feminists, liberal feminists and postmodernists — it can sometimes be difficult to see where the common ground is. Just like 3D Doritos came in what seemed like three incredibly different flavours – Jalapeno Cheddar, Zesty Ranch and Nacho Cheese. Heck, only two of those are even cheese-based! But please, don’t even talk to me about Doritos Jacked 3D. They are not the same thing. You may as well be a TERF.

For those who are unaware of the term “intersectional” or “intersectionality,” it is intended to be a frame applied to all Feminist discussion and literature that recognises that there are many aspects to culture and identity and the various ways they overlap can compound or complicate issues of oppression and discrimination. And 3D Doritos were like a buff, sexy corn chip. Not quite a pyramid but more like a puffed up triangle pillow held up by magic.

The reason intersectionality is so important to feminism is that without it, minority people and their identities are often ignored or underplayed. It’s essential that feminism be inclusive, just like a toob of Doritos 3D included 300% of your daily sodium intake. If we want our feminism to be at 300%, that’s where we have to start. And again, please start selling 3D Doritos even if you have to make the machinery all over again and sell it at a loss. Some things are worth fighting for, and damn the cost.