Dollissa and I have been stuck on another app game. Well, two actually: Homescapes and Gardenscapes.

Unlike Sailor Moon Drops, even though we fail levels over and over and over again, we are not demoralized. Actually, we get stuck on a single level for days at a time, spending five lives (or more, depending on whether or not we score bonus lives or that delicious infinite lives reward on G-Scapes) on the same thing. Over and over and over. The layout is the same, but the pieces change. It doesn’t bother us. We have found tranquility with this way of life. 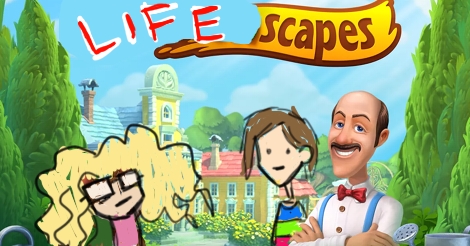 Our destiny is determined by the whims of the Scapes Gods. Using boosters makes no change. We must play until we win, whenever that might be. It could be the first try, it could be the fiftieth try. As we have no way of knowing, we just play. We enjoy the moment. We let go.

We have somehow been playing these two games every day since September. It doesn’t have to take up too many hours in a day, but sometimes it does. And sometimes, you find yourself becoming a little frustrated and bored by how many times you have almost won. If only you hadn’t spent game coins to get five more turns last time, because THIS time, it would have helped! But, as with any self-improving meditation, these obstacles build your character. You learn these virtues of patience, and trust in the Fates. You begin to believe in perseverance and hard work. I assume that some day these qualities won’t only apply to these apps, but that day has not come yet. Maybe one day we will use our Scape Powers to do good in our actual lives. 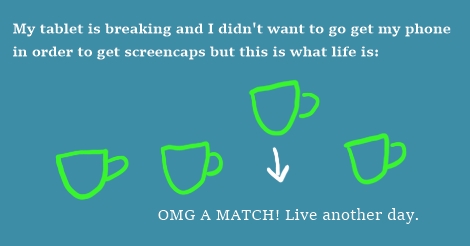 How did we start playing this? One day Dollissa said she had started playing this game. Ordinarily, she doesn’t tell me this unless she has a suspicion that it will take over her life and she needs someone to discuss it with. I said, “that’s nice,” like I always do and then inexplicably by the next hour, I had installed it and gotten to level twenty. Such is the way of things.

As we reside in our Sneer House, neglecting to do necessary renovations, we spend hours doing the renovations on this game mansion. The plot seems to be that this butler, Austin, is helping fix up his parents’ mansion. His dad was a butler who lived in this mansion. His own mansion, I guess? Anyway it’s a ramshackle place and it needs a lot of sprucing. 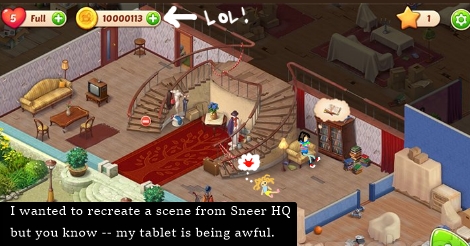 I have learned that when you fix a room, you have to fix it all the way up and it takes forever because things keep going wrong. The To-Do List begins simply and then never seems to end. You want to paint the kitchen but then you discover that you have to win three games in order to even move away some clutter first. I assume that is what would happen in real life, too, if only we had match-puzzle games to keep us motivated. The game even has a stray cat that moves in, in a blatant attempt at app-imitating-life. Thank goodness there is not a “pet cat” game in Homescapes, or else our cats would probably become feral and emaciated.

Somewhat maddeningly, by the way, I am in a stage of this game where they are renovating the garden. So I have been working on two different app gardens for what seems like years of my life right now.

When we were playing Wordscapes (whatscapes?) we would sometimes see an ad for this game. It never seemed very interesting. But one evening (the first evening) after installing Homescapes, I was waiting for my lives to build back up and decided to try out the Gardenscapes. I told Dollissa that I had done that, and she said, “ooooh,” like she always does, and the next day she told me that she did too and so began our real descent.

Gardenscapes came first apparently. We did the addiction process backwards. The plot for it is something like, you inherit your uncle’s estate, and he had a garden which has turned ugly over time, and that same Austin guy is the butler. Even though he is the butler, he is helping you put this garden back together. Even though he frequently says that he is only a butler and not a gardener, he is the one who is fussing over this garden with you. And what a garden it is! So many fountains. So many landscaping features. So many different themes.

We have a much smaller yard and garden at the HQ but this game rings true. For every new feature you wish to add, several things get in the way and go astonishingly wrong. But, you get a puppy and more side games and exciting bonuses in this one, as opposed to Homescapes. Game play is a little different. Neither Scape is better than the other. 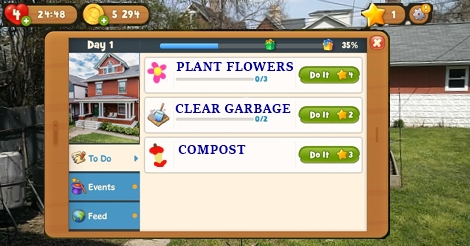 At this rate, our real home and garden will crumble and fall around us, and we will still be sitting here, stuck on levels 96 and 114 for the rest of eternity. I suppose when we have reached level 1000 on each game, we can look up and see that the world has changed, and that we are elderly and deformed from not moving enough. But the games have convinced us that it is worth it, and that we will never regret the time lost to them.