American Pharoah: A Hell Of A Horse

For as long as I can remember, which is about 10 minutes these days, I’ve wanted a living American Hero to look up to. Sure, I have lots of heroes − writers, musicians, saints (Mr. Rogers) − but none of them, to me, really represented my love for the red, white, and blue. Maybe if I liked baseball or wrestling I’d feel differently. And then came American Pharoah.

When I mention Secretariat the Famous Racehorse to people, their reaction is usually to say something like, “wow, you really love horses.” I do enjoy myself a good horse. But, as I explain to them, what I love is Secretariat. Now, what I love is American Pharoah too! 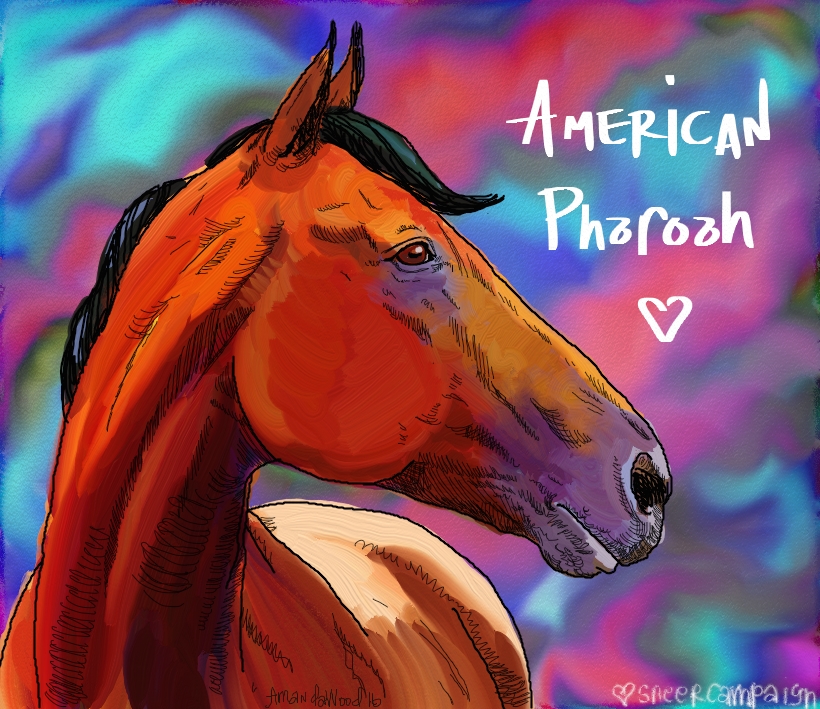 As a kid I went horseback riding every so often, with maybe a week of horse camp thrown in here and there. But, mostly, I just wanted to be a cowboy. When I started to go through my angsty pubescent years, I stopped wanting to go riding. My sister, now a veterinarian, never really tired of it. I couldn’t handle the horseflies, the itchy saddle, the pain in my thighs afterward, and the way my delicate ladyparts slammed down into the saddle if I missed a beat while posting.

I didn’t know what horse racing really was! Although by this point I had presumably seen A Day at the Races, certainly witnessing something wacky in a Marx Bros. movie doesn’t mean it was a real life thing. I of course learned later, partially after walking past a disgusting, piss-smelling OTB in the Port Authority in New York City.

When I first heard the name American Pharoah, it was already time for the Kentucky Derby. I wanted to bet, so I looked up the odds and horses.

Here’s the part where I’d like to mention that I’m not exactly a fan of horse racing. Those doped-up, adolescent, majestic animals are probably not all having a very good time while the jockey whips them with every stride. Okay, let’s not get into it right now. But I’d like to believe that not all trainers abuse their horsey friends.

I’m also no big fan of gambling. What I wanted was the opportunity to be a part of history. In 2015, there hadn’t been a Triple Crown of Thoroughbred Racing winner in 37 years. Only a total of 11 horses had won, and it’d been running since 1875!

So on May 2, 2015, the Kentucky Derby was held for the 141st time. It took place, as always, at Churchill Downs. American Pharoah got a little too frisky leading up to the gate and had to be calmed. They feared he wouldn’t run well after wasting energy. He edged past the other horses in the last stretch to win the race, his first step to making history. His jockey, Walter Espinoza proclaimed, “I’m the luckiest Mexican alive.”

Pharoah was born on February 2, 2012, to Littleprincessemma (named after the owner’s daughter Emma). His sire, or daddy, is Pioneerof the Nile. If you didn’t know, thoroughbred horses must be bred by live cover or witnessed live mating, no artificial insemination allowed. This means that someone out there watched American Pharoah’s conception!

I never did place any bets. It was confusing. The rules are different by state you live in and where the track is located, so I gave up. The Preakness Stakes that year took place on May 16, 2015. It was a rainy day and Pharoah had the unfavorable first post for the race, but his fate was already sealed. He won the race. I didn’t find out until later in the day, as I was away on a hippie commune camping out with some earth children. They didn’t really want to hear about the Triple Crown but I told them anyway.

Ahmed Zayat owns Zayat Stables, LLC and American Pharoah. He is an Egyptian-American jew who lives in New Jersey (so he’s basically me). He’s also a philanthropist and often contributes to Jewish causes and schools, and to help special needs children.

A few little things leading up to the Belmont Stakes on June 6 had some worried about whether there’d be a Triple Crown winner after the drought. He was even leaning back at the start, but got an early lead anyway. The rest is history. He didn’t just get the Triple Crown that day. He was also the very first horse ever to complete the Grand Slam! He is the 1st Grand Slam Champion of Thoroughbred racing for completing the Triple Crown along with the 2015 Breeders’ Cup Classic. He also set the record for the cup, though it’s only been around since 1984.

American Pharoah, you can be my plus one anytime. If you’re not too busy bein’ a STUD (for $200,000 a pop). Apparently it’s notable that he retained his sunny disposition while being a stud horse. Good job, hero! 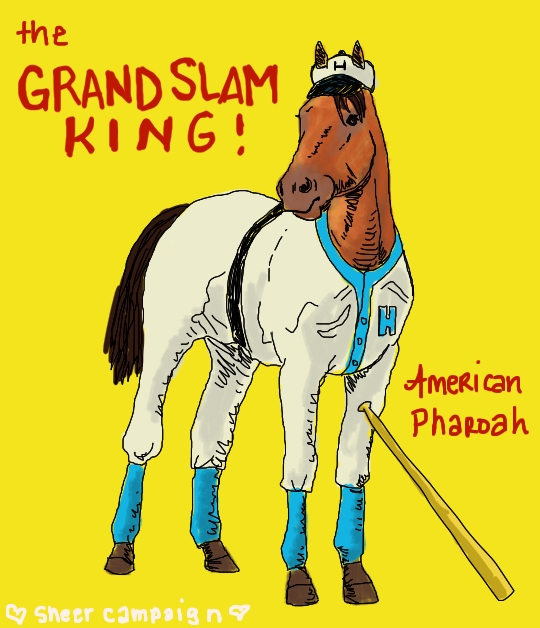