Astronauts are real life modern day heroes. They have to combine physical ability with intelligence, they train for emergencies, and to be cool under pressure. Coincidentally, they seem to always be humble, brave, and kind. Even though they are the only people to leave this planet, they are always so down to earth. The MOST down to earth, perhaps. They put their lives on the line in order to make scientific advancements and it is a scientific fact that they don’t get enough admiration and attention. What, do they have to star on a scifi show about space? Are you waiting for them to toss a football on the Moon? Enduring an acceleration from 0 to 750,000 in eight minutes should be impressive enough for us. And it is now, at least for me!

Speaking of me, I just want to sleep today, but then I thought of the wise words of Terry Virts, Astronaut Man who made an appearance on Star Trek and apparently that was what his name was linked to if anyone bothered to google his name. He said in a talk he gave yesterday, that I attended, something like, “Don’t tell yourself no.” Wait that’s not good for right now because I need to tell myself to not dream big by sleeping and dreaming. Wait all of my go-to inspirational sentences that I can think of are telling me to sleep. NO.

If Terry Virts slept, he would not have become an astronaut who got to sleep on the International Space Station up there, beyond the sky. He listened to ambient sounds of rain, just like I do sometimes! I am not so different from an astronaut.

The other year, I went to see spaceman Scott Kelly, the American guy who has been in space the American longest. It was also a great speech because like all astronauts apparently, having an outside perspective causes them to see the earth as a whole and we are all Earthicans to them, like on Futurama. It’s good because I think that way too, because I am an earthlocked astronaut. 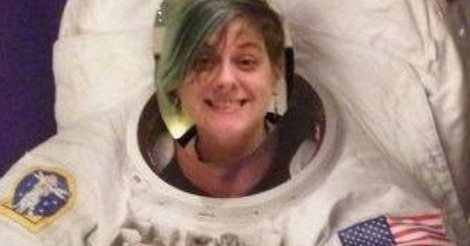 Terry Virts has the distinction of being a person who has taken the most photos in space. Over 300,000! He showed us like fifty of them and told stories. It is a great way to spend time and I can’t recommend it any more highly than I do. I recommend it to the maximum, 100% recommended. I’m not sure how frequently astronauts speak in other states. It might be a benefit of being in Ohio, the Astronaut State. I’m trying to use that word as much as possible because I am too sleepy to reach for a thesaurus.

His photos are breath-taking. Inspiring. I would post one in this article but I assume that NASA and National Geographic would ruthlessly shut our entire site down for daring to cheat them of dollars or something. NASA, I can’t blame. They need all of the dollars they can get since politicians are fickle and short-sighted idiots. Why are politicians in control of scientific discovery? Who thought that was a good idea?

There is an Italian astrolady, Samantha Cristoforetti, who is very famous in Italy. Terry Virts, in his talk for which I was in attendance, mentioned that she is the most famous Italian lady. That Italians treat her like a rock star, and I think that is a great idea. Astronauts SHOULD be the most famous people. What did rock stars ever do for that fame? They aren’t even skilled musicians most of the time. I’m using my article to promote the idea of astronauts as the best people who should be the most famous in our culture. Let’s change our American culture. This is the only time I will ever say “let’s be more like Italians.” 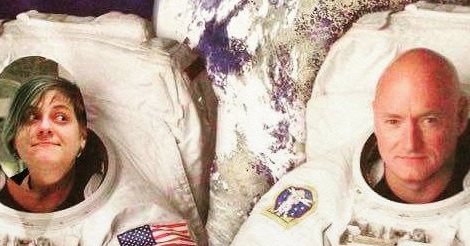 While we’re at it, let’s be more like astronauts. They see the earth as a precious orb deserving of care. They see news as a screeching distraction machine. They exercise two hours a day and marathon view television while they do that. They sleep to ambient earth noises. They are 250 miles above earth, in silence, with few friends who are from all around the world. They conduct experiments and are sometimes photographed with dogs. It is basically the perfect dream goal of us at Sneer Campaign. I wish we could put HQ into orbit. They are normal people who have made the right life decisions which led them to be blasted into outer space and I can’t think of any type of person that I respect more, except for people who rescue neglected animals. I guess I have a lot of respect for them, too.