In Celebration of Sneer Campaign

Years ago, the internet was a vastly different place. In order to get onto it, you had to install a program called “AOL” which would “dial” your “modem” over a “phone line” that used wires and use “squealing noises” to transmit data at speeds up to 18 kilobytes per second. To put that in perspective, it would take you nearly ten minutes to teabag your opponent in “Call of Duty.” Spotify would take an hour to download each song on your workout playlist. Which you’d have to listen to on a huge beige tower on a desk connected with lots of wires.

We’ve come a long way since then. What once promised to be the information superhighway has been turned into a feedback loop of cognitive dissonance by social media. Seeing doctors, which no one can afford anymore, has been replaced by “home remedies” like collecting your urine, aging it in the sun, and then drinking it. The resulting spewing of bile from all of your orifices is “detox,” which means it’s working! People tell desperate parents that autism is preventable but the pharmaceutical industry just wants to keep you dependent on their wares, and that for $49 per month they’ll send you untreated gutter water and bleach that’s been chanted at by druids to cure it. 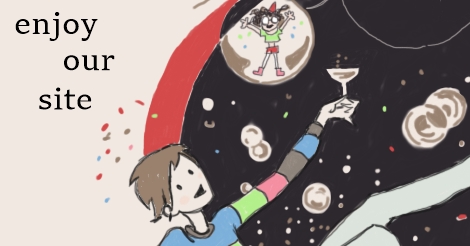 But all is not lost. In 2015 two brave women, Amandoll and Dollissa, started Sneer Campaign, packed with guides to Everyday Life, such as the irrational fear of lethal insomnia, surviving trips to flea markets, and every iota of information humanity possesses on plague doctors, which are a kind of leather stork. Do they want money? Yeah, probably. But their wisdom is shared at no charge to you, slack-jawed yokel reading this.

I know you want the inside dirt on these two cryptic geniuses, so I traveled to Sneer HQ to interview them one on one except there were three of us and some cats. The following has been edited for brevity, coherence, and veracity. Also it was going to be made into comic form but Amandoll had a fit of laziness so in classic Sneer Campaign style, you are expected to be happy with what you get instead.

DANIEL: Thank you for your time today, WOMEN LADIES. [removes monocle, polishes it, replaces it.]

DOLLISSA: It’s lovely to be here in my own house.

AMANDOLL: [is taping tie-dyed scarves to her arms]

DANIEL: So, first question: What caused you to found Sneer Campaign?

DOLLISSA: A very good question. One reason is Amandoll and I wanted a place to express ourselves artistically. Another is I feel Amandoll is best not left to her own devices.

DOLLISSA: I think I liked it when you were a snail better.

AMANDOLL: You say that, but you NEVER let me have any more gelatin!

DANIEL: [Starts to take notes, remembers he is holding a mini cassette recorder] So SC is something of a passion project?

AMANDOLL: Exactly. If I’m not creating, I’m withering like spaghetti on the vine.

DOLLISSA: There just weren’t enough sources of INFORMATION, you know? Facebook is all Nazis and fake news, and the less said about Wikipedia, the better. In fact, I’ve already said too much. I need a minute. [places paper bag on head]

DANIEL: I love this idea. Can I have one?

AMANDOLL: We use it for shopping

DANIEL: So has the site developed its own voice in the past four years?

AMANDOLL: I believe so. [Switches to bad British accent] Blimey! When we started out, we were really BASIC, you know guvnah? It was mostly cat pictures stolen from Reddit and encoded pipe bomb recipes for our friends in Switzerland. [clenches fist and raises it above head] LONG LIVE THE REVOLUTION!

DANIEL: What’s your vision for the future of Sneer Campaign?

DANIEL: What would you like to say to your fans?

AMANDOLL: [Picks up empty cigarette holder and sticks a “Twizzler” in it, takes long drag] I love you ALL, dahlinks! You are beautiful. Buy a tote bag.

DOLLISSA: I- I killed a man.

AMANDOLL: We also have “duvet covers.”

DOLLISSA: I don’t know why. I was angry, and he was there. I wrapped my hands around his throat and just — just SQUEEZED.

AMANDOLL: Did I mention we have T-shirts?

DOLLISSA: I watched the life fade from his eyes. And I’d do it again. GOD HELP ME I WOULD–

DANIEL: Thank you for your time. [Presses power button on recorder]

DOLLISSA: Wait — the LED is on now. Was it off before?

AMANDOLL: Yeah, I think you had it off and just turned it on.