I’m not sure if you guys ever noticed this, but updates on this site can ebb and flow. As we are the most depressed mini-cluster of writers on the internet, this makes perfect sense. At any given moment, one or all of us is in the throes of a crippling despair — or, in contrast, one or all of us is chirpy and pleased with life. This wide range in overall mood is reflected in our overall productivity, here at the Sneer Campaign and also in every single aspect of our lives. 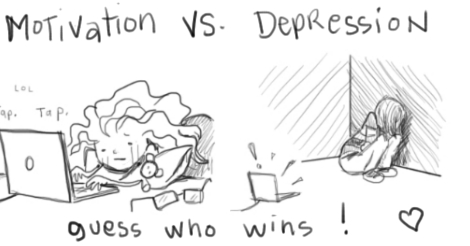 I guess I should start off by telling you about Depression, as if you are at all strangers to the concept. But I know our demographics. You’re all a bunch of first world 20- and 30-somethings mostly. I assume you are all actually in the midst of your own Pity Parties RIGHT NOW, and are just taking a break to read this article in the hopes of finding some gentle humor to ease your troubled souls. Well, indulge me here for a minute. Pretend that you are all perfect spring flowers and have never seen a reason to frown in your life. Do you remember what that feels like? I think I might, but I could also be severely mistaken and I am just emotionlessly imagining the color blue. But emotionlessness is just an absence of sadness, and that doesn’t automatically mean “happiness.” Although some days, it is just as welcome of a relief. Am I even getting ahead of myself here? You can bet no one cares.

Things happen that cause depression. I am not a brain doctor, and the idea of hormones and chemicals that your own body creates sabotaging your mood really is disheartening to me. Doctors are beginning to understand what’s going on, but I am not convinced that they know well enough to be able to competently prescribe medications to treat it. Meanwhile, I have even less idea of how that all works than they do, so I am not going to talk about that intricate, frightening aspect and cause of Human Depression. As much as I’d love to recommend patients get punched in the head until their brains reset (truly, I would be first in line for that treatment), I have a firm suspicion that it wouldn’t work at all, and in fact they would wind up with a new facet of psychological issues. Stupid dumb brains being tricky! However, I am more than able to explain to you guys the Five Kinds of Depression As I See Them. Why five? WHY NOT?

As far as depressions go, this one is the most understandable. Things in life can happen that are actually sad things. Stressful things. Death of a loved one instantly springs to mind. Disease, injury, and chronic illness are good reasons to mourn. Divorce, being fired from a job, betrayal, all of these kinds of things are obviously things that will depress any person. No one will blame you, no one will even misunderstand why you are crying. This is also one of the easiest depressions to manage because life goes on and you learn to live with things. The Mourning Process has definite steps that you can observe, and while life might not ever be the same again, you logically know that you will survive. Just don’t be one of those people who refuses to get over it. How tiresome and melodramatic. Let yourself heal as soon as you can (but not too soon, you cold weird monster).

This depression relates directly to the whiny part of your mind. We all have responsibilities. And sometimes we would rather not do them. Bills, cleaning, chores, errands, obligations — they are all so overwhelming and all you want to do is lie on the couch and watch every season of some long-running sitcom. That’s sort of like an accomplishment, and that should be good enough for the rest of the world. The worst part is that the longer you put off whatever it is you have to do, the worse you wind up feeling. You start feeling like you are a worthless amount of garbage, and you give yourself a guilt trip. Eventually you have something like a temper tantrum and cry away the tension. This is a really really pathetic form of depression, but one that some people live with for 90% of their lives.

When you have this kind of depression, it is actually intricately linked with other psychological issues that you harbor. Everyone is a little insecure, everyone’s self esteem is a little delicate some days. I am pretty sure that everyone on the planet has felt poorly about who they are. When it lasts for an intolerably long time, it is a type of depression. No matter what you do, what accolades you have earned, whatever kudos you deserve – no matter how much everyone else envies and praises you — YOU KNOW that it is all a sham. You are ugly, you are fat, you are not some impossible-to-attain-or-even-describe physical ideal. Your morality is questionable or nonexistent. You hurt everyone you know. You ruin anything you love. Everyone’s lives would be better without you being there. What a miserable wretch you are. What a waste of life. 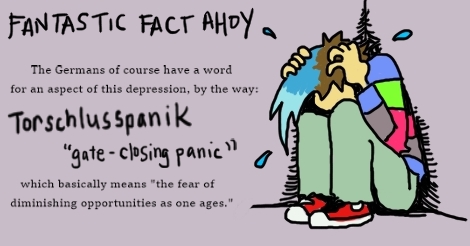 Hint: This depression easily becomes a self-fulfilling prophecy and you lose friends, but you don’t always realize that it is because you lament to insufferable levels about nonsense like this.

Other times, maybe you are just sad about the state of the world. This gets a lot of people frequently, as well it should, looking out there. I mean, I am only minimally aware of the News, but what little I do run into usually dismays me and if I am already prone to being depressive, it can send me twirling helplessly into a huge despair session. Politics, opinions, ignorance, bigotry, deforestation, the poaching of animals including those which are critically endangered, pollution, greed, torture, war, misery, disrespect, starvation, death, and destruction (just to name a few of the most obvious) are all enough to keep some people in bed all day with the covers over their heads, and pillows over their faces in an unconscious attempt to smother out life. Or maybe to at least fall asleep and forget. When the whole world is so messed up and apparently actively working against all effort to be pleasant, peaceful, or kind, how can a person wear any sort of sincere smile? How can a person do anything except feel sick to the stomach and stare in an empty manner at a blank wall while inwardly reeling at the horrors of the whole world? We are all so small and ineffective. There is nothing that can be done. Halp!

This fifth depression is the one that bothers me the most, personally. I know that Circumstantial Depression will pass. I eventually drown out my spoiled whining and do the things I am meant to do, which usually leads to me feeling better about myself anyway. Usually something changes in my mind regarding Self-Hate Depression (probably a hormonal shift, tbh) and I once again feel okay about being me. I can sometimes rationalize that the world goes on no matter how ridiculous things get, and that as long as I do my best, that’s really all I need to do. Things are fine, I sometimes believe. But this depression I am speaking of now… I also call it “the Nameless Depression” and it’s a mixture of dread, endless despair, and complete hopelessness.

At its worst, this emotion is physically painful. On an ordinary day, I feel like I am a human meat person who takes up the normal amount of space and am full of organs. When this depression strikes me, I feel hollow and strangely infinite within the confines of my skin. Like there is nothing but an endless void that yawns eternally inward, and it is horrifying to notice. There is no apparent reason for you to feel this way, but you can’t shake it. Eventually, you don’t even try. You feel like you are dying, but nothing is actually killing you except your own feelings of loss. Loss of what? The self? Of hope? It is an absence of hope and you don’t know where it came from, but it is there. And it is made all the worse for not knowing what is causing it, nor how to get rid of it. It is the worst of all feelings rolled into one concrete ball that is resting on your chest and on your shoulders.

Often, all you can do is rest on the floor and cry until you can no longer cry. It lasts for minutes, or hours, or maybe even weeks. It can ruin your entire life. It can also appear from out of nowhere. You can be fine and then suddenly it hits you. You feel like you can see clearly for a million miles and a million years, and there is no use for anything in any direction. Then you cry — this crying is in no way therapeutic, by the way. You don’t cry it out. You just can’t do anything else! Unaffected observers might believe that you have gone insane, and maybe you have. I do not recommend having this kind of depression. Avoid it, if you can. 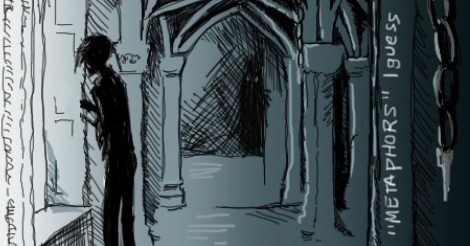 So, as I was saying. Each of us gets one of these five depressions fairly frequently − sometimes a few together! At times like that, it is just one more strike against the idea that we want to entertain the faceless masses, all four of you. While we gave up trying to be funny long ago, we do like to at least be entertaining, and it is so hard to entertain when it’s all we can do to lift our heads to take a feeble sip of water. Or, to be honest with you, we are sometimes throwing ourselves into another project unrelated to this place, because sometimes the internet existing at all can cause our delicate moods to crumble like the house of frowny face cards that we really are.

If you want to learn about Seasonal Affective Disorder or Manic-Depression or any of the others, you can probably find a site allll about it within about two clicks from here. It will give you something to do, something you can count as “productive” somehow.