Today is Adam Pally’s Birthday! Happy Birthday Adam. To celebrate we dedicate today’s article to the one and only Max Blum from Happy Endings. We are going to celebrate by also celebrating me because that is how things are done when they are done in the spirit of Max. 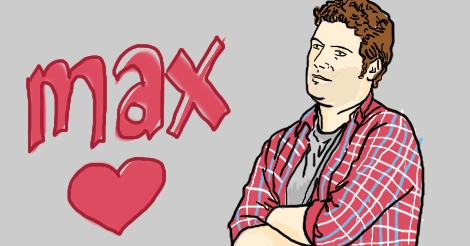 I grew up questioning my sexuality. I’ll just fill for a moment while you pick your jaws up off the floor, and unpop your monocles from their resident sockets. Ahem, so, I grew up questioning it. Not questioning it in that confused, pussy-footing around kind of way – more interrogating it just within the bounds of the morality and good taste. Well, morality. Well, – I’m getting distracted. Anyway, point is I’m a big ol’ queero.

Looking around myself as I grew up, I had little in the way of role models. I mean there were gay and queer “icons” and certainly people that were referred to as role models, but I didn’t feel like I could really relate to them. Any of them! In all of television and movies, I never saw a sliver of myself. If anything, I felt alienated by Queer Eye and token gay friends and characters in sitcoms. Queer as Folk and the L Word at least had some good gay fucking in it. But even then it’s sanitised, and somehow characters are sexually so undivergent that they could all be the same person.

So things genuinely changed for me when I started watching one of my favourite shows ever, Happy Endings. We’ve sneered about it before in Dollissa’s “Requiem for Happy Endings.” One of the core group of six, Max Blum, is a lazy, scheming, messy over-eater who is sharp and funny in a way that relates in no way to his sexuality. He’s an example of how you can have exaggerated comedy characters still be well-rounded and relatable. Three dimensional. 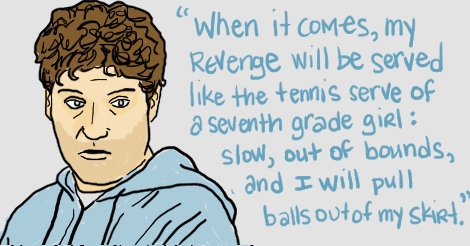 But more than that, he’s unashamedly queer. He’s arguably a typically masculine person but regularly crosses gender lines in various ways (including winning a drag show and playing in a Madonna tribute band as Mandonna) – and in these instances his playing with gender fluidity is never conflated with his very static sexuality – a distinction very far off the radar of most television shows, and a character facet ahead of its time. He’s not forced into the role of “straight-acting gay” nor is he made to constantly announce his difference.

Played by the wonderful Adam Pally (who plays another favourite character, “Bro” on Comedy Bang Bang), he was inspiration to me. He showed me that as a queer person I didn’t have to fit an archetype to feel like I could belong in that world. I could still be the abrasive, messy, rambling fatty that I am to this day. And that is wonderful gift – to me. I have no idea how it is for everyone else. Probably bad, I’m guessing. But I don’t care. Another gift to me! I’m up 2-0. Fuck you guys.