Nicknames are funny things. They are what you call people when you are close enough to be casual and goofy. They are based on things that you know about them, because you’ve spent SO MUCH TIME with them that you can develop special names. Some nicknames are not so nice, but it’s kind of like that thing where you’re mean because you care. You’re mean because you love. It is acceptable, if annoying, to have a mean nickname, but it is tolerable from a friend, and fightin’ words from anyone else. 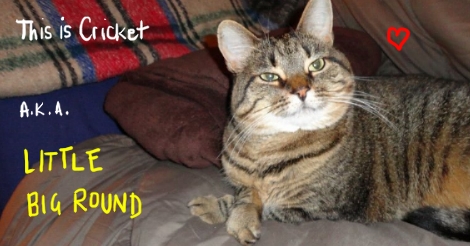 Here in our Sneer World, we have nicknames aplenty, although it isn’t like we are a little childhood gang where we have these nicknames in place of our birth names. Who has that kind of dedication?? We just have words we call each other, specifically, when the time is right. That’s why there’s Amandoll and Dollissa, Priss and Demanda, Alexolotl and Salamanda — wait, maybe they are all just duo team names with me included? No. It’s just the BEST ones. We also have Kay Flay, B-Hole, and Omie G Jeremy. I just made that last one up. Welcome to your new name, Jeremy!

Of course, living with all of these cats leads to the same kind of familiarity. The cats have a lot of facets in their personalities so there is no end in sight for these names. They more or less ignore us any time we say anything, anyway. 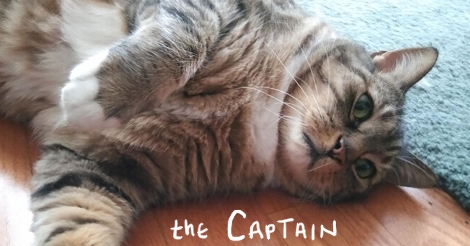 The Captain showed up as a young cat, a stray the neighbors had brought home. Even as a youth, he seemed large and imposing, so I thought we should give him a stately sort of name that commanded respect. It worked! He grew into a gigantic cat who does indeed command respect. He also has a really dog-like personality and will roll in dirt and not bathe. 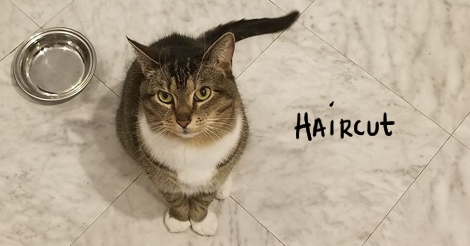 A stray, Haircut came to Dollissa because a fellow student in Newark found her stuck in a tree. The cat, not Dollissa. Somehow, the word “haircut” when said aloud sounded like the perfect name for this little dummy. She isn’t known as the smartest cat, but she means well, like most of our hairdos do. 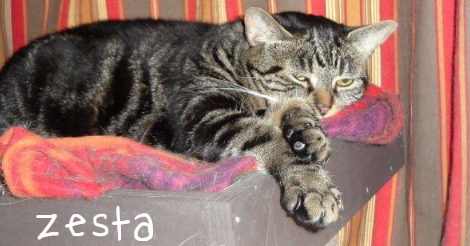 “Zesta” is a brand of saltines. I eat them, but I won’t eat Zesta the Cat! Zesta arrived on my porch one day. She was a tiny underfed lanky little cat that I instantly had a bond with. Again, just like with saltines. Mmmm. 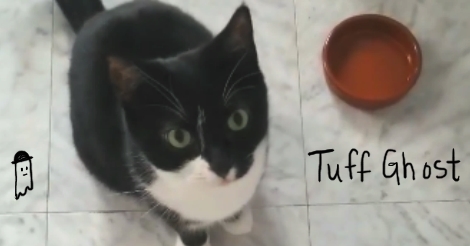 Tuff Ghost and his sister, Sea Ghost, (both named after song titles) were strays in New Jersey — impossibly tiny, scared little kittens who were taken in by Dollissa and nourished. Sea Ghost lives far away now, but Tuff Ghost is at Sneer HQ, always scared looking. Always being hunted by Custard. 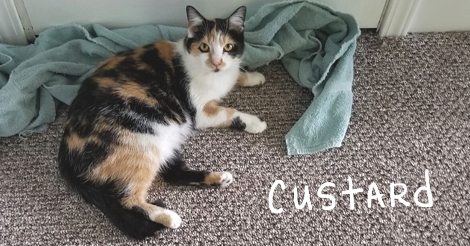 Another stray, pretty much feral when she came to our yard last summer, Custard was famously difficult to name. I called her a hundred different things for weeks and weeks. Still to this day, I call her lots of different things, but I have finally accepted that her name does suit her, in a strange way. Custard is sweet. This cat is sweet. Although she’s only sweet to those of us who live here. She hides from anyone else. 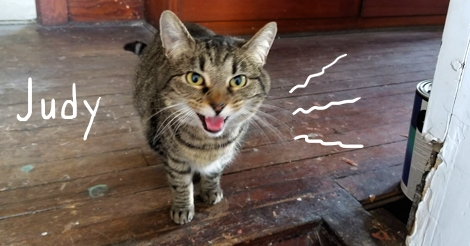 This cat was a stray who showed up and never left in September of 2017. You see? These are ALL strays, showing that we aren’t crazy cat collectors as much as we are soft-hearted suckers. Judy was originally known as “Porchcat,” then “Loudcat,” then “Atticat” when she came inside to live in the attic. The names reflected the fact that we are (still) fostering her until she finds a permanent home. We named her “Judy” after the writings in the attic closet from some girl named Judy, presumably now our ghost. We did this because we didn’t want to write “Atticat” on any veterinary forms.

Shout outs to Cricket “Little Big Round” (seen at the beginning) and Olive “Bigfoot” (seen right under these words). They live in other homes now, but their nicknames will forever be part of our lives. 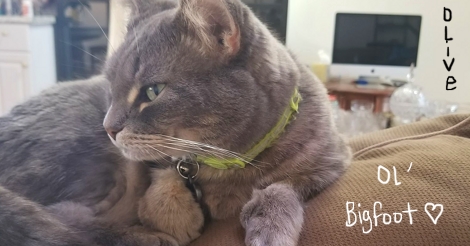