Why We Are Dolls

It has been mentioned before that Dollissa and I had terrifying doll personas at the advent of Sneer Campaign. We have these dolls as avatars that attach to our author names when we comment, I think. Originally, they were going to appear at the end of each article, but we wound up selecting a wordpress theme that doesn’t do that. For a second, we were disappointed. Then we realized that it was probably a good idea to not have those unsettling dolls leering out at our readers. All that remains are our names. Confusing doll-names attached to two girls who don’t even like dolls. But how did we cook up the idea in the first place? Why, it’s all the fault of cchris, of course! 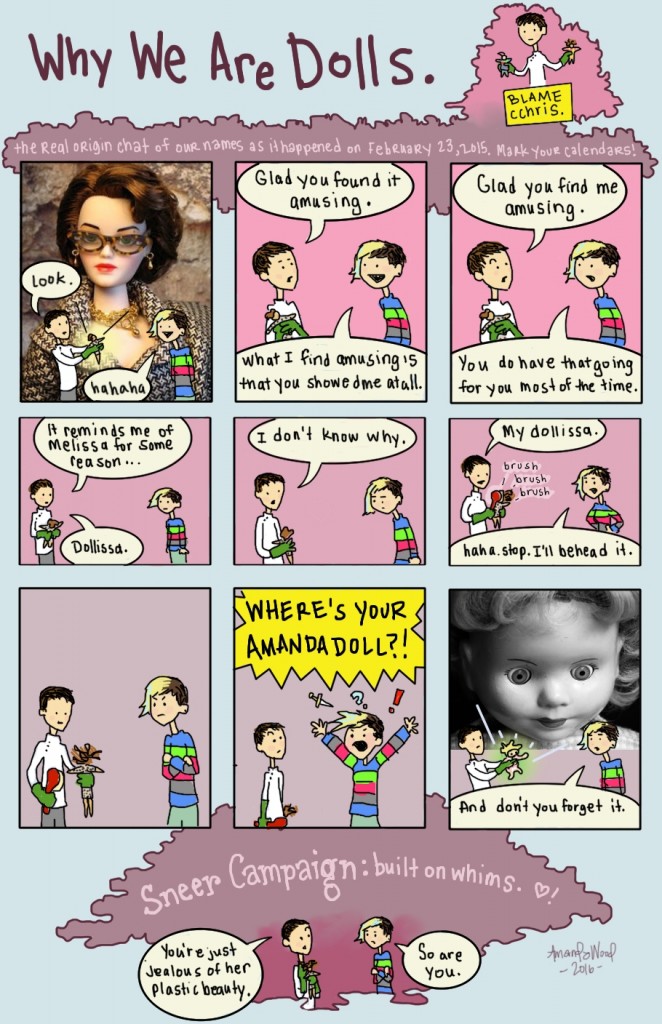 In February of 2015, Dollissa and I decided that it was time we start a site. I used to be part of omgjeremy dot com, and it had succumbed to Fate, godaddy, and a simultaneous depression that had crippled all writers involved. A few years had passed, and I was ready to produce content again. But we needed a snappy site name. We kicked around several names (the only one I remember was “poop culture” which we feared would be mistaken for a different sort of site), but then on February 7th, 2015, I had the big idea to ask cchris what he could think of.

Amandoll: melissa wants to make a celebrity gossip site where i just do daily comics about some current scandal. either single panel, drawing, or a real comic, but we need a site name

Amandoll: i do kind of like sneer campaign
i like to sneer
i would be sneering a lot as i drew

Dollissa: its a good name

Of course, we refer to our store as Sneer 1 Imports, and that is also the name of our tumblr. You can’t let a good name go to waste. He also said “a softer side of sneers,” which will probably be a gentle series in the future, when we are a little older and kinder. Also, I had totally forgotten that we were originally going to just make comics about current celebrities and their shenanigans. I’m glad we abandoned that plan almost as quickly as we abandoned the dolls.

So thank you, cchris, namer of the site. Our inspiration, our muse, our coldest consort, the original wielder of the sharpest sneer, the Charlie to our Angels, the Tuxedo Mask to our combined Sailor Moon, the Claymation Angel Satan of Amandoll’s dreams, and Dollissa’s future husband, or at least her future kidnapped dream date. Thank you for one day trying to make me jealous of a picture of a doll probably 100% just so you could then burn me with a picture of a different, more horrible doll.

Everyone else, I hope you enjoyed this little comic of historical events.