Our Dream: Open a Deli

We are not short on dreams here at the Sneer Campaign. We have many sleep-dreams, of course, but possibly even more than that, we have irl dreams. You may call them flights of fancy, if you wish. You could even call them mere whims. But don’t let these terms cause you to think that we are fickle, or idle dreamers. Everything we daydream, we really do want. Sometimes, the want CONSUMES us.

The other day, while shopping for the future Sneer Headquarters, I happened upon a listing that brought light into my life. I immediately sent it to Dollissa with the message, “I never wanted to own a deli until this moment.” Of course she instantly replied: “me2.” That’s all it takes to turn a notion into a rock solid life plan. 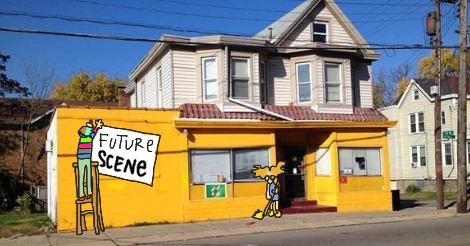 So, hello world. The sneer campaign will almost 100% definitely be brought to you from above a deli that we own and possibly run into the ground. Well. We’d run it into the ground if it was just a standard deli, which of course it wouldn’t be because who dreams of opening a standard deli? Our future success depends entirely on which name and identity we give ourselves. In this modern world of branding, everything depends on this so much more than the quality of foods we offer.

This is the most obvious and ego-saturated option: a deli as an extension of our site/lifestyle! Expect the webpage you are on right now to feature a menu that updates three times a week to reflect what we, ourselves, have been eating and offering at our location, which is decorated in space lounge decor. Come to Sneer Deli to buy toast with nutritional yeast on it, babyfood served elegantly in an atomic starburst bowl, fried eggs from our own hens, and undercooked pizzas. We would have a television that would either be playing music videos that we enjoy, or loops of Secretariat’s many wins. We would eventually make the news for ridiculing our customers too harshly, and possibly for coldly denying a sale because we didn’t like someone’s attitude. But if you treat ’em mean, you keep ’em keen. We would become a neighborhood fixture.

I’ll be honest with you, we probably will cut this from the running first. This deli would be decorated with dolls looking down from the ceiling, judging every order. The food would have doll themes: Lolly Dolly Salami, Barbie Q, Bratzwurst, Betsy Wetsy Spaghetsi, Newborn Baby Footlong, etc. The music we would play would probably be a mix of circus music and twinkling music box melodies punctuated by recordings of demented giggling and blood-curdling screams. Dollissa and I would be sure to cry frequently throughout the day in order to heighten the nauseating feel of terror and, somehow, a sense of being trapped in eternity. We wouldn’t last a month!

“Free Kitty Fur with Every Meal!”

We have heard a rumor that people like cats. There are happy cat cafés dotted around the world, so why not a food place filled with kitties? Decor would be an obscene amount of cat furniture and about fifteen cats all lounging about or frisking or stealing food from patrons, or from us as we try to prepare orders. How adorable! Assuming we can bribe health officials and get talked about on the Internet, we will become an international sensation. All of our menu will be items that are safe for cats to ingest, because they most assuredly will be trying all day long. Cat-grade tuna hoagies will be our specialty, obviously. Maybe some mouseburgers, too.

“You Can Dance, You Can Dine, Having the Time of Your Life”

Colorful lights, mirrored ball, thumping disco music spilling out onto the sidewalk, all will confuse and possibly annoy passersby. We’d ship in cchris to give us all the interior decoration tips and to arrange our soundtrack. We’d become the Studio 54 of sandwiches and sides. Would there be mountains of drugs and filthy happenings? Why no of course not! Well, I mean who knows what goes on in the VIP Room in the back. We won’t squeal on our glamorous celebrity patrons! For the normal people, our establishment would hold Saturday Night Dance Fever events, a tiny roller disco, and a safe place to enjoy fine music of that type. We would last about ten years until it was proclaimed by one and all to be “the day the disco deli died.” But at least we are bound to feature in a documentary afterward!

First, we would hire a full cast of obnoxious younger twentysomethings who concern themselves with current fashion trends and materialistic notions. Probably, we will make the hiring process into a competition and claim that the Ujelli Deli is going to be a deli based reality show on MTV. This will ensure that the worst people in the tri-state area will be drawn to us like a magnet. Backstabbing, drama, condiments thrown in rage, and pithy remarks aimed at each others’ brittle little egos will be laid on thick by the hour. No one will ever be a repeat customer, after becoming nauseated at the display of human tragedy within, but Dollissa and I will cackle endlessly, entertained from our apartment above by the not-so-hidden cameras installed all over the business. And hey, MTV might actually show up one day with a contract to buy our ready-made show! Wealth! Success! Downfall of Society!

“when ur hungry af”

This particular deli is located across the street from a high school, so it seems like it would be wise to pander to the youth of today. Hashtags and octothorps will preface the items. Want some #hashbrowns? Why not try dank meme green beans? We would probably be shut down as soon as our lives turn into an episode of It’s Always Sunny in Philadelphia and Dollissa gets the reputation for using sammiches as a way to prowl for barely-legals (but still legals!) and the enraged soccer moms begin viciously protesting us and spreading mean, mean lies. In other words, this deli would last about two weeks until a mother commits vengeful arson, destroying everything we own.