I have a Steam account for some reason. Like I like to repeat repeatedly: I don’t really play games. I get hopelessly addicted to app games and then abandon them, or not. Still, I have a Steam account. It is nice to constantly forget to set it so that it won’t start automatically every time I restart my computer. It is great that it is constantly updating, always, nonstop. I like seeing that one of my friends is playing a game, reminding me to go into it to Exit it until next time.

But also, I have a Steam because I like getting gifts, and I have been given a few games by friends. And like six days out of a year, I think, “Yeah, playing a video game sounds pretty good right now.” It’s obviously well worth my money, or the money of friends. No actual regrets or complaints over here! I’ll play them one of these days! I want to! I’ll do it, I swear! 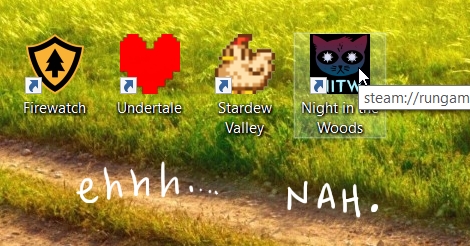 Dollissa sent me a copy of this game where you are playing the part of a ghost. This is a great idea! I want to haunt EVERYTHING without having to die and hope that that’s how the afterlife works out after all. However, there are some very glaring problems with this one. Mostly, the maneuvering around the house was instant headache city. I can’t navigate with a first person camera! I can barely walk around looking out of my own head some days.

My experience as an invisible entity was short, uncomfortable, confusing, and filled with pain. And it fills me with another kind of pain because I REALLY wanted to play this. I wanted it to be my hideous addiction, my escape into a better reality. Also, I just had to look at the Wikipedia page about it to make sure I wasn’t misremembering everything about it, and I guess I wasn’t. But also I don’t think I knew what the plot even was when I was playing it originally. 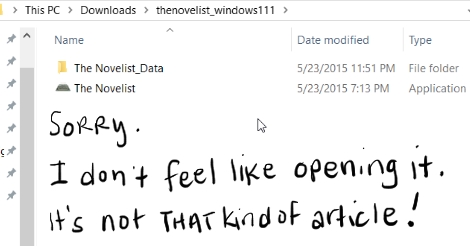 Night in the Woods

OMGJeremy insisted that I play this and I did! I actually played it. I even finished it. It’s a delightful little game filled with likable characters who talk all cute and it was easy and I accomplished things — even when things were scary! This game made me think that maybe I like video games after all.

I started playing it again, deciding to choose different options in order to see how different the outcome would be but I stopped. I stopped because what am I, made of time? Suddenly playing games was a waste. Suddenly I had a million more important things to do. But it’s still sitting there, waiting for me.  Sorry, Night in the Woods. We were almost friends forever, but now we are merely acquaintances. 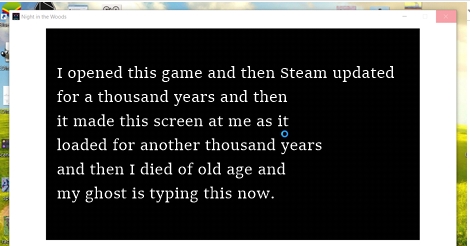 One day, I was sick or something, I can’t remember, but I asked OMGJeremy if there were any good games on Steam that I would like, since that last one was such a success with me. He recommended “Firewatch,” which I guess enjoys a high rating among game players. I asked again and again if I would experience motion sickness, because the trailers made it seem very first person POV, which I can’t stand. He assured me that it wasn’t very bad, and that I would be fine. So Kevin bought it for me, I don’t remember how I convinced him to.

I really tried playing this game! After I waded through the hundreds of text-based exposition leading into my stint as a park ranger (which is a nice idea for a game, and what swayed me). I made it through, I think, two game days before I had to turn it all off forever. An hour of stumbling around on trails, becoming dizzy and stuck in small copses, getting instantly, irretrievably lost, and grappling with game controls.

This trailer seems entirely unlike my experience. Maybe I should try again.

I also ground my teeth down to nubs because the lady I had to interact with on the park radio was the stupidest, most irritating, worst woman they could have made as a character, without any option to reply the ways I wanted to — I really wished, every time she tried flirting with me, that I could say, “I would prefer it if we kept things strictly professional.” Or, “you are being inappropriate.” “I don’t care.” “You are a horrible, horrible woman.” “Do you actually think you’re being cute?” “I hate you. Don’t contact me unless there is an emergency.” But no. I could only dream of saying those things, while suffering a small aneurysm thinking that maybe that’s the sort of personality idiot men love for idiot women to have.

ANYWAY. After about an hour of that, I then had to lie in the dark, spinning inside of my head, which ached oh god how it ached.  Jeremy and Kevin both have told me that I need to try again, maybe build up tolerance in order to be able to play that game. And maybe I would if I could turn off that awful radio woman. Because I am not going to build up a tolerance to her, EVER.

I was attracted to this game because AlexT started playing it, and informed me that I seemed to be the main character. This was a surprise to me, so I decided that I should see what I get up to in this little world. Other friends told me that I would “probably” like it because it is light-hearted and I guess easy?

And it does seem to be. I only made it a few scenes in before I became confused and abandoned the whole attempt. I liked the simple graphics and I liked that it didn’t wobble around, giving me a headache as a result. But I basically don’t understand what is going on, and have little motivation to actually find out. I think it might depend on the player being adventuresome? Some cow fairy told me to stay put, and I started to venture forth, but then I felt guilty and went back to where she left me. Then I’d get into what I think are fights with things? But I am not sure if I am fighting right, or accomplishing anything. Then it happened so much that I started feeling anxious. I really should finish this game though. It looks so easy, how can I be so bad at these things? Amazing.

This game is great for a person like me. A person who likes boring open-ended games that don’t really seem to care if you never achieve even one goal they set for you. Also the very first townsperson I ever met was named Alex and seemed to be based on AlexT. This happened at about the same time that he met me in that Undertale game, so it seemed EERIE. DESTINY. FATE.

I was playing the HECK out of this on the Switch, but it belongs to Dollissa, and Manny plays it a lot too. But once, when I was in severe addiction phase, but visiting my parents, I thought it would be sensible to just buy a version of it for my laptop. So I did. And then I discovered that I don’t like playing it with a keyboard.

I’ve started a few different farms, and none are as good as the original Mamflar’s life that had just entered its third year. And I have heard that you can make it interactive with friends somehow now, but what’s the use? Maybe I need some sort of little game control thing, but those keyboard shortcuts — I haven’t even figured out most of them yet. Be more intuitive! Be so intuitive that I only have to think it, and it happens. That’s all I want. That’s all I want out of every aspect of my entire life! 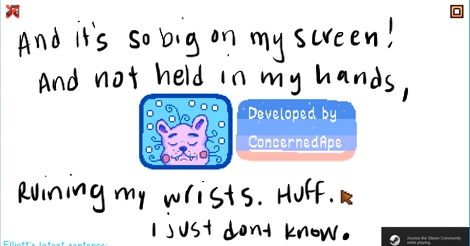