Sighing for Some Sightings

Are you like us? Do you enjoy delving into the supernatural, whether you believe in it or not? Do you love mysteries? Do you enjoy reading about the occult in all of its forms? Do you love syncing television shows from the 1990s that are all about mysterious supernatural mysteries of the unknown and unexplained? Do you love doing that so much that you fear you will soon run out of episodes? Are you the same as we are, and do you contemplate the day when you will have to start making your own episodes of this type of show? 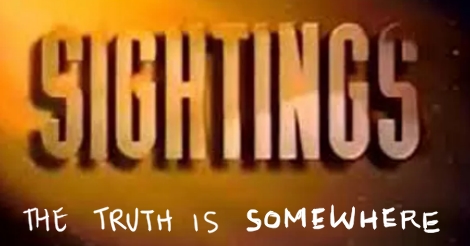 It’s been heavy on my mind today. It’s the afternoon and grey, I don’t have an article ready, but I want to watch Sightings instead. It is inevitable, once we understand how to edit video and become YouTube sensations, that we will be making a paranormal tube show. So those of you who, like us, yearn for such programming, we will soon have you covered!

As it turns out, Sightings adheres to a formula that is pretty easy to copy ruthlessly. I will list for you the things that you must do, the same as I will one day do, but you will probably do it better and be picked up by Buzzfeed or something while I die in obscurity. … Which actually might be preferable to a show like this becoming my lasting legacy. Maybe I should contact the host and ask him how it feels.

A Host That Might As Well Be a Cardboard Cut Out

First, find yourself a host who is so devoid of personality and is so clean cut looking that it is laughable that he is talking about ghosts and psychic abilities. Have his eyes speak to you about the paycheck he is getting while he pronounces foreign city names. Have him sound like he has just a trace of skepticism in order to try to lend some credibility to the words he speaks. Or, just get an actual puppet. Don’t forget to have him randomly offer cautions between some segments, reminding the viewers to not give ALL of their money to charlatans. 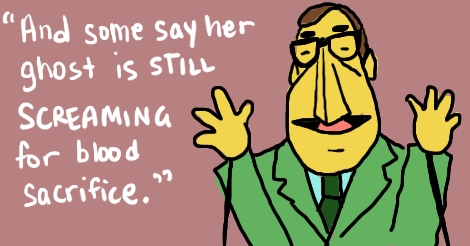 The rest of the show is made up of segments that always consist of these topics, or involve these colorful characters:

A Roster of Muriels on the Case

Cchris and I are big fans of the “psychic detective.” The best ones, which we refer to by the name of Muriel for a complicated reason, are older middle aged ladies with deep gravely voices, as though they have smoked four thousand cigarettes just today. They are inserted into most investigative segments about ghosts or demons or angels, but they also “solve murders.” We will have to wait a decade or more for Tonyana to fit this role, so we will probably just hire someone’s great aunt to read the script we gave her, which is what we assume the Sightings producers did, too. Bonus points if you get an old gal who says “honey” a lot, and make absolutely sure that you have her clutch at her own throat while rasping out, “I can’t breathe. It hurts! Help!” Is she having a psychic link or experiencing a medical emergency?? No one can know for sure. 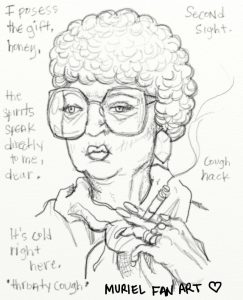 Muriels are the true experts of the show, but whenever there is pseudo science on display, be it through healing with just the mind, or angel-granted tinctures, or just crop circles, there is a legitimate expert. This person is a doctor, and they proudly proclaim that they hold a PhD from a University on this exact topic, somehow. Every time this happens, cchris threatens to throw his own in the garbage, but I hope he doesn’t so that we can use him for any opinion we need. I think we actually looked up one guy (yes, only one, what are we, made of time?) and it turned out that he had been in trouble with the law for falsely claiming to have the credentials he was credited to have on the show, and maybe others. Imagine that! 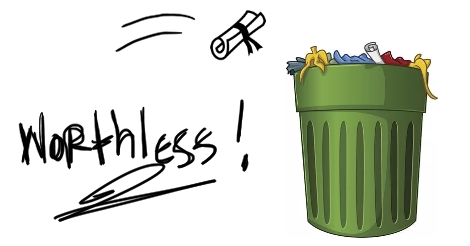 Sightings delights us with at least one story hailing from the American Deep South per episode. Civil war ghosts, past lives, whole towns saturated with “the unexplainable,” the South has the hook ups. In your show, play up that accent, as best as you can, as you describe anything from a Satanic ritual gone wrong (requiring the help of a Muriel if possible) to a spate of food that looks like religious stuff. Get someone who can well up with trauma-tears a lot. Always have them comment about Jesus Christ protecting them somehow, at moments that you wouldn’t normally expect. Just throw it in there! It smacks of legitimancy, which is a word you are invited to include in the garbled vocabulary.  Buy some mullet or 80s girl hair wigs, or dare to go out there into the world and harvest from the throngs of people who apparently still exist that look that way. Offer them a quick twenty bucks and they will be relieved when it is only for this shot at instant fame.

Or just have fun with it and cast your same friends for different roles while wearing different disguises. No one will know the difference. For example, AlexT, a British person, can just don a wig known as the Kentucky Waterfall, a certain form of mullet, and do his best Appalachian accent while describing his close encounter of the sixth kind, whatever that may be. 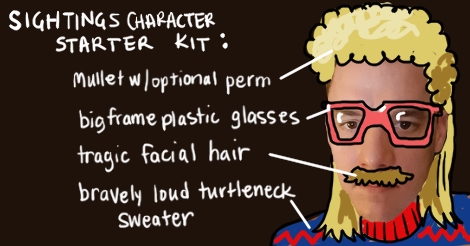 While you have a Southern person in your home studio, be sure that whatever they are describing has some key words that sounds suspiciously and uncomfortably sexual in nature.

The Southern girl with the tall, crispy bangs looked a little embarrassed. “The demon pinned me down and said in this deep voice, “MAAAKE LOOVE TO MEEEE.” and I couldn’t move.”

“The alien, I guess,” the Southern girl with the 80s hairdo hesitated, “spooned me after the probing. But I still couldn’t move.”

“I don’t know what it was, some say the chupercoobra, but whatever it was held me down, and,” the Southern girl with extensive hair crimping grimaced and teared up, “I’m sorry I can’t go on.”

Make the viewing audience go “uhhhhhh” at home, while they feel like they are watching filmed testimonials of victims of the more earthly forms of molestation. If it is the modern times but it is spoofing the calloused past, do you include #triggerwarnings? That decision is left to you. 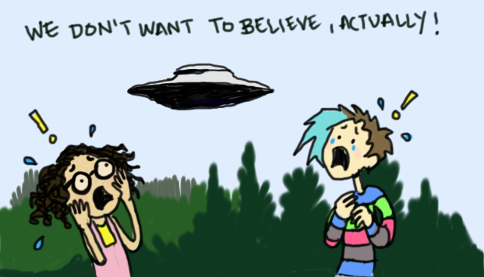 Use the Zoom Feature

Hands down, my favorite part of Sightings is when I am surprised by their seemingly random placement of a fast, tight zoom onto a person’s face. I can never anticipate it, it just is suddenly THERE. And then I laugh, like a fool, for far too long. One of the best moments of this entire year happened when they filmed a nurse with miraculous angelic healing powers exiting a building, from 300 feet away, and they ZOOMED right in on her blithe, smiling face complete with empty eyes, as she presumably could see angel lights twinkling all around her. It will never cease to be my Happy Thought, and my foolproof trigger into a laughing jag. 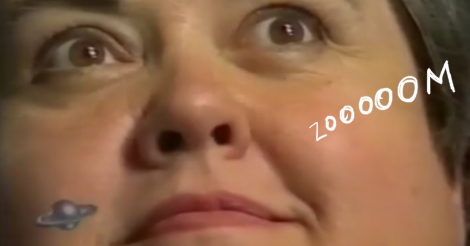 Sightings wasn’t ONLY sensational accounts of the unreal and imagined, they are also educational! Include segments about pagan religions and the beliefs of other kinds of people. Use phrases that signal to your white viewers that there is much to fear in this world that is undeniably real, such as but certainly not limited to: Santeria, all of Africa, and even sometimes so-called “Christian” things like snake handlers and tongue speakers. If it isn’t your idea of what is safe or mainstream to normal people, then that is your cue to educate the world about it in the most biased sounding way you can muster! 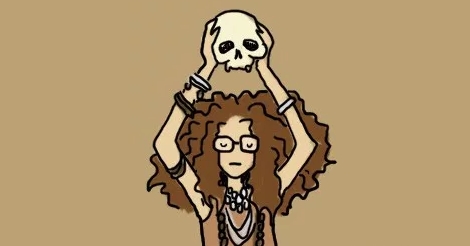 The Vaguest Predictions Known to Man

Finally, another key element of the Sightings experience is the inclusion of psychics predicting what is in store for the next year. When you set up your own segment, have your psychic predict the following:

But then, occasionally throw in some hopeful news such as the ultimate proof of aliens or Bigfoot. Throw the legitimate kooks in your audience a bone. Keep them coming back! After all, they will be the ones leaving comments, criticizing you and generating buzz, giving you clicks and advertising revenue. And, truly, that is where your fun hobby becomes a successful empire — the Dream of All!